And another bites the dust…. From yesterday’s NY Post, AC/DC will be joining a few other 80′s rockers to launch a wine collection in partnership with New South Wales, Australia based- winery Warburn Estate.  Enjoy!

“For Those About to Quaff… AC/DC Wine is Due Soon!”

Hard-living rockers might not automatically make consumers think of fine wine, but “For Those About to Rock” legends AC/DC are lending their name to a new line.

The Australian band has entered into a partnership with New South Wales, Australia-based winery Warburn Estate to produce four bottled varieties, named after some of their hits — AC/DC “Back in Black” Shiraz, AC/DC “You Shook Me All Night Long” Moscato, AC/DC “Highway to Hell” Cabernet Sauvignon and AC/DC “Hells Bells” Sauvignon Blanc.

According to a fan website they are not the first rock band to launch a wine collection, with past trailblazers reportedly including KISS, Motorhead, Whitesnake and Warrant.

AP
AC/DC is lending its name to wines.

Steve Donohue, general manager of buying for the Woolworths Liquor Group which will sell the line, told Australian Associated Press that it was a “no-brainer” to sell the wine nationally.

“This is a world-wide phenomenon and a first in the marketplace,” he said.

One of the highest grossing bands of all time, AC/DC survived the death of original singer, Bon Scott — who died in London in February 1980 after a night of heavy drinking — to rack up more hits with his replacement Brian Johnson 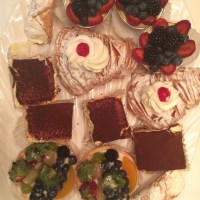